Apache Warns of Zero-Day Exploit in the Wild — Patch You Web Servers Now!

Apache has issued patches to address two security vulnerabilities, including a path traversal and file disclosure flaw in its HTTP server that it said is being actively exploited in the wild.

“A flaw was found in a change made to path normalization in Apache HTTP Server 2.4.49. An attacker could use a path traversal attack to map URLs to files outside the expected document root,” the open-source project maintainers noted in an advisory published Tuesday.

“If files outside of the document root are not protected by ‘require all denied’ these requests can succeed. Additionally this flaw could leak the source of interpreted files like CGI scripts.”

The flaw, tracked as CVE-2021-41773, affects only Apache HTTP server version 2.4.49. Ash Daulton and cPanel Security Team have been credited with discovering and reporting the issue on September 29, 2021. 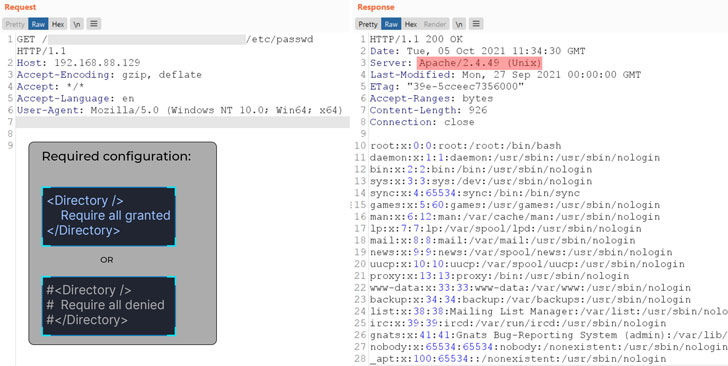 Also resolved by Apache is a null pointer dereference vulnerability observed during processing HTTP/2 requests (CVE-2021-41524), thus allowing an adversary to perform a denial-of-service (DoS) attack on the server. The non-profit corporation said the weakness was introduced in version 2.4.49.

Apache users are highly recommended to patch as soon as possible to contain the path traversal vulnerability and mitigate any risk associated with active exploitation of the flaw.

Oops! Compound DeFi Platform Gives Out $90M, Would Like it Back, Please
Next Post: How to Build an Incident-Response Plan, Before Security Disaster Strikes